http://solar-in-china.blogspot.com/ is my blog for China's solar energy industry, and I did not plan to talk about other issues here. But since the 8.0 magnitude earthquake hit Wenchuan China, all Chinese people have been following the rescue operation progress, and hundreds of thousand people went to join the rescue and disaster relief operation, the whole nation is moved by lots of heart-broken stories, and I would like to share such stories here with you. Please see my future articles.

Chinese governemnt agencies, companies, and individuals are donating to help the victims, but over ten million people are affected by the earthquake, the death toll will be over fifty thousand, and about two hundred and fifty thousand people are injured, especially many children lost their parents, and many senior citizens lost their sons and daughters. These victims need our help, and I hope you may forward the earthquake information to your friends, and I hope you may pray for them, and help them if possible. 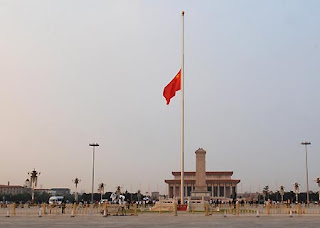 China's national flag flies at half-mast after the flag-raising ceremony on Tian'anmen Square in Beijing Monday morning, May 19, 2008. China on Monday begins a three-day national mourning for the tens of thousands of people killed in a powerful earthquake which struck the country's southwest on May 12.

At 4:58 a.m., the national flag at the Tian'anmen Square in downtown Beijing flew at half-mast after a complete flag-raising ceremony.

About 2,600 people watched the flag-raising ceremony in the square.

All national flags will fly at half-mast at home and Chinese diplomatic missions abroad from Monday to Wednesday. Public recreational activities will be halted during the mourning period.

At 2:28 p.m. Monday, Chinese citizens nationwide will stand in silence for three minutes to mourn for the victims, while air raid sirens and horns of automobiles, trains and ships will wail in grief.

In the mourning period, condolence books will be opened in China's Foreign Ministry and Chinese embassies and consulates around the world.

The Beijing Olympic torch relay will also be suspended from Monday to Wednesday.

The death toll in China's devastating earthquake rose to 34,073 as of 12:00 a.m. Monday, according to the earthquake relief headquarters of the State Council.

And 245,108 others were injured in the 8.0-magnitude quake that jolted southwestern Sichuan Province last Monday.

According to the Ministry of Health, about 52,934 people have been hospitalized and 7,979 have recovered while 3,304 died in hospital.

The quake hit Wenchuan County, Sichuan Province, at 2:28 p.m. of May 12. Many other areas were also affected.

The search, rescue and disaster relief efforts are continuing. Some 113,080 Chinese soldiers and armed police have been mobilized to help with rescue operations. Rescue teams from Russia, the Republic of Korea, Japan and Singapore, as well as Taiwan and Hong Kong regions, have also joined in relief efforts.
发表者 Green China at 8:43 PM No comments: