-Start of construction planned for next year

Erlangen/Hohhot (China), August 22, 2007. Solar Millennium AG, Erlangen (ISIN: DE0007218406), together with Inner Mongolia Lvneng New Energy Co. Ltd., has founded a company with headquarters in Hohhot in the People’s Republic of China. Both companies each own 50 percent of the new company Inner Mongolia STP Development Co. Ltd. based in Hohhot. The joint venture was established for the development and construction of the first parabolic trough power plant in China. The first step is the commissioning of a feasibility study expected to be completed by mid-2008. Once a positive result from the study has been obtained, the realisation of the solar thermal power plant is planned immediately.

The joint venture is the first result of the framework agreement signed last year in the presence of the Chinese Prime Minister Wen Jiabao, German Chancellor Angela Merkel and the German Federal Minister of Economics and Technology Michael Glos. This agreement stipulates the construction of solar thermal power plants with a total output of 1,000 megawatts by Solar Millennium and two Chinese companies.

This planned first project covers the construction of a parabolic trough power plant with an output of 50 megawatts in Inner Mongolia. The project was already included in China's current five-year plan and is meant to be an example for the use of such technology in China. Three alternative locations are considered as part of the feasibility study. Flagsol GmbH, the technology subsidiary of Solar Millennium AG, has been commissioned to carry out large parts of the feasibility study and will pay special attention to the design of the solar field.

Solar Millennium Chairman of the Board, Christian Beltle, comments: "We want to start with the construction of the first parabolic trough power plant in China as early as next year. Solar Millennium AG has successfully developed the first parabolic trough power plants in Europe and will now be able to construct the first solar thermal power plants in China. Constructing this power plant in a joint venture with our Chinese partners as an example of sustainable power generation in this region - a region that is characterized by rapidly increasing energy consumption - is a great honor for us."

Each parent company will provide half of the management of the joint venture.

Solar thermal power plants generate electricity using heat energy captured from solar radiation. In a parabolic trough power plant, trough-shaped mirrors concentrate the sun rays onto a pipe in the focal line of the collector. Their absorption causes a heat transfer fluid to be heated in the pipe, generating steam in the power block by way of heat exchange. As with conventional power stations, the steam is utilized in a turbine to generate power; by integration of thermal storage, this power can then be supplied on demand. Thus, solar power plants can also generate electricity after sunset.
发表者 Green China at 8:37 PM No comments: 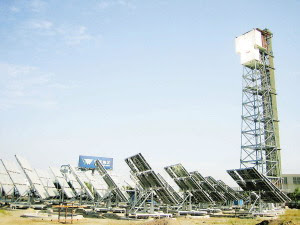 At present China has only built one 70KW solar tower project in Nanjing, and the power generation cost is about USD 0.27 per KWH. The experts have obtained 4 Chinese patents and two U.S patents from this project. And Chinese experts are working on one 100KW parabolic trough solar thermal project now.

Chinese experts believe they can reduce the solar thermal power generation cost to USD 0.08 per KWH within 4 years.
发表者 Green China at 11:58 AM No comments: